This track has it all: Wide streets, wide canals, and wide-body jets: Can it get better? Yes, with sun shine, please! Today I did the Ringvaart Haarlemmer Meer, another one off the bucket list and recommended by DC Rainmaker.

The name Haarlemeer refers to a what used to be a large lake (“meer”) between the cities of Leiden in the south and Amsterdam in the north. In the middle ages, even Spanish warships fought a fourious battle on it. Now, all that remains is a circular channel that surrounds it. This is thanks to King Willem I, who in 1837 decided that the people of Leiden and Amsterdam should never get their feet wet from the Haarlemermeer again. Which brings me to a bit of history lesson on dijk (dike) building:

But what is a polder and what is dijk?

To create land from water, first the Dutch build a dijk, in this case the ringdijk surrounding the Haarlmermeer.

Whenever you see a river that is higher than its surroundings (which looks weird and kindof dangerous) chances are that you are in a polder.

These waterways are primarily to transport the excess water away, but can also be useful later to transport goods and people. The water is pumped out of the inner, enclosed region into them, decreasing the water level on the inside, a process called “drogmaalen” (drymilling). Traditionally, the Dutch did this with wind mills (that’s why they are everywhere), but not so in the case of the Haarlemermeer. Here, steam rollers were used to drive the pumps for the first time! This inner-region, which hopefully eventually will be dry, is the polder.

The tour I rode today, which despite the weather was very popular with race bikers, takes you alongside the Halemeerpolder, in the channel created around it, the ringvaart. The beauty of this tour is that one can start (and end it) in a number of different cities in the Randstand: Amsterdam, Leiden, and even Den Haag. On the way, I had pretty strong headwinds (4-5 on the scale), but at least on the way back, I could then smash it.

I even entered the secured part of Schiphol today (more or less by accident). Only for a few meters, but still, the gate went up. 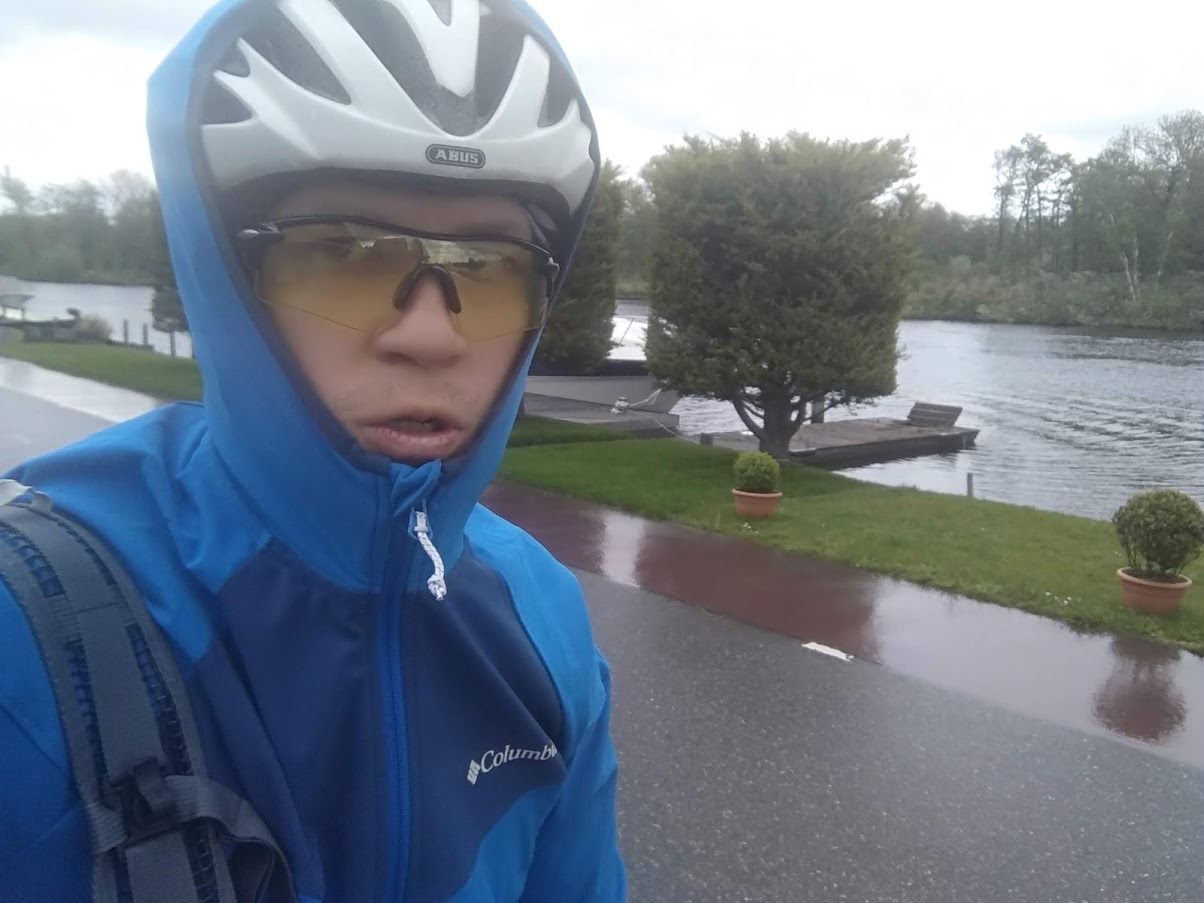 Next to some stunning villages, the tour also takes you along Schiphol airport, or in my case, a little bit into it. All of sudden, the bike path ended and I was in front of this 4-gate super huge security station. I saw on the map that I needed to travel that direction, didn’t think too much of it, and sure enough, up the gate went. I continued on, when I heard the lady jump out of her little house and say “Mooooment. You have to show me your pass.” She was really nice though (seeing my misery in the rain/hail) and told me where I can merge onto the bike path around not through Schiphol airport.

On the way back, I met Jasper. Well, what that means is that my Elemnt Bolt showed “Jasper K.” on the map and about a minute later, I saw a guy on a nice green Giant Propel. As I passed, I quickly noted that he had an Elemnt, so I took my chances and shouted “Jasper”, hoping it would somehow make his day ;-). No reaction at first, but a couple hours, later, I get this comment on Strava. So that made my day. Technology, kids …

On the way back I also had a near-crash with a suicidal dog. I had just cleared Leiden and was on some very nice, wide bike paths, practically no traffic, riding in the drops, away from my brakes. I’m doing maybe 33km/h, the aero wheels slicing through the air in the gratifying “woooosh-wooosh-wooosh” sound one can easily get addicted to. There is a woman with two smallish dogs on the left, about 5m away in the grass on the other (!) side of the bike path.

When all of a sudden, one of the beasts decides to go absolutely mental and sprints toward me, barking.

This is how it must feel riding a train and something all of a sudden jumps in your way. I wouldn’t have been able to do anything at all, lest try and bunny-hop suicide-dog (which would definitely still have hurt him and me very much). Fortunately, the dog keeper somehow gets the leash fastened in the last moment and all I hear is the scratching of suicide-dog’s claws on the tarmac, having no grip to close the final meter. What the heck.

Oh, and did I mention that I got hailed on again? Once home, I had some stomach cramps, which was weird because I felt pretty good on the bike and never had issues before. I hope it’s not the new Isostar I bought. Maybe I ate too little before starting and then also too little during the tour. I am pretty proud though that I barely stepped off the bike, with only 15 minute pause time, and ate everything (two bars) on the bike riding.