Despite being woken up by someone drilling at 6:15 (seriously!?) and thus having a lot of extra time, somehow my day got very stressful today. One reason for that was that I basically wanted to ensure that I arrive in Amsterdam before 4 pm, to be able to attend a “Manic Monday” event organized by my friend Hennie.

Of course, I went there by bike. Which, since buying my Wahoo Elemnt bike computer, meant I first had to set that up. Now, I really like to take my time when unboxing new gadgets, explore them from all facets and make sure to set up everything in good order. Unfortunately, by the time I got to install the computer, I lacked that time. So what was there to do?

I am still stoked to report that I managed to get all of these things done – flawlessly – within just 20 minutes (the only thing that was a bit more finicky was updating the firmware of the Bolt. After clicking the upgrade pop-up on the Android app, you think the Bolt isn’t doing anything when really, it is downloading the firmware in the background, but the app does not show this. You have to go into a sub-menu on the Bolt to see progress)! This is especially remarkable since one of the reasons why I bought the Bolt was that I could not reliably connect my sensors to my mobile. 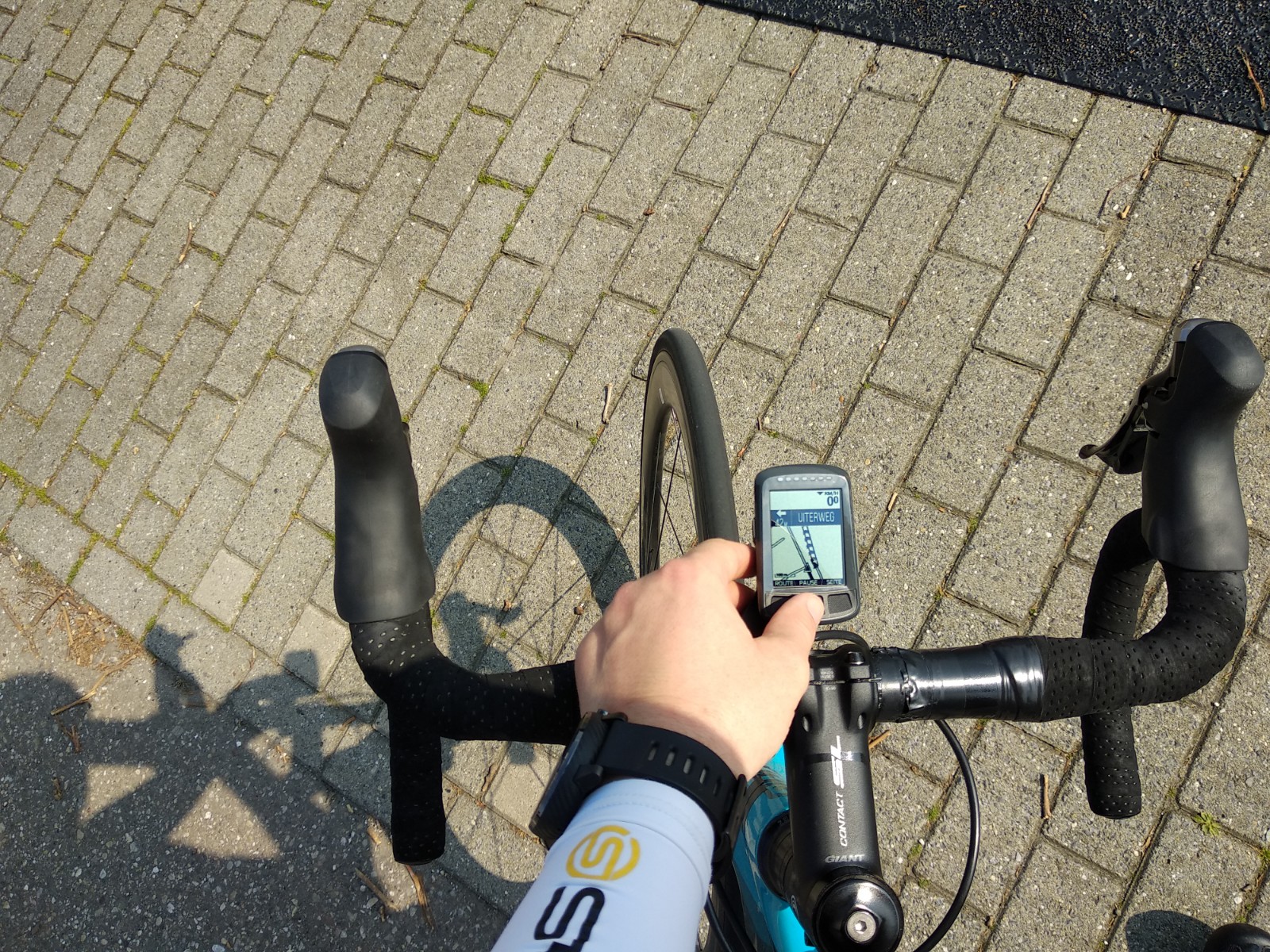 The monochrome display of the Bolt works surprisingly well.

Finally out of the apartment, I was concerned whether I could reliably navigate with the Bolt. Good thing I knew the first third of the route from my previous trip to Lisse. As anyone knows who has ever navigated on any GPS device for the first time, one usually has to get used to the device – and the device to you (by means of configuration). With the Bolt, all I did was to auto-orientate the map in my direction of travel. I made one (!) wrong turn on the trip, and that’s because I could not believe I was supposed to go on such narrow a path – but sure enough, it was all good.

The ride even contained a crossing with a ferry (which Komoot correctly announced) – it goes every day until 5 PM, from April also during weekends, and costs 1.20€.

Komoot did yet another excellent job at route planning: All I did was enter my destination, and off I went! This route was overall very beautiful (even avoided the ugly Leiden central station) and I will definitely do it again! So many nice cute towns (see for example the title picture of Oude Ade, despite being short on time I just had to take it!) and a good flow in the route overall. No wonder: Parts of it share the same route as the Ringvaart Haarlemmermeer. 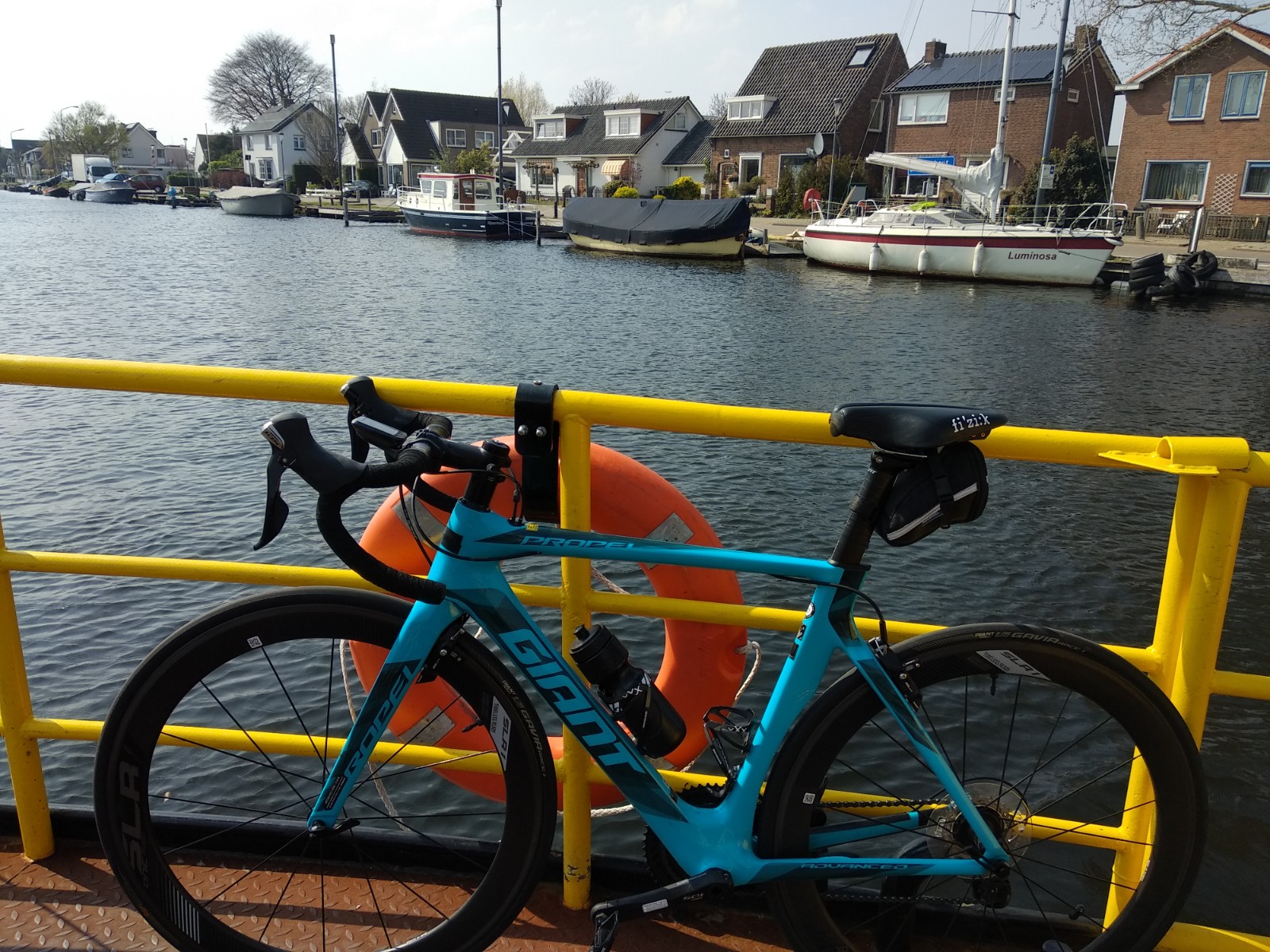 Back at ING, it was great to meet with Hennie and Nachi, who had flown over from the States to give a keynote – which, incidentally, featured stuff I did during my internship at Microsoft in 2017. So that was nice to see (and a big surprise).

Big thanks to Elvan and others who helped me park my bike somewhat safely (I would have definitely preferred to take it inside instead of to the garage, thanks very much, ING!). Of course, turning up in Lycra in an office building with gated doors is a bit unusual – but then don’t we all want to be eco-friendly? I wonder when it is that difficult to park your bike, even in the Netherlands, where people are both chill and bike fans, how is it in the rest of the world?

PS. Another interesting thing I did today was to compare three GPS devices – but this will be worth a story of its own.