Day 2: Off to buy the cheapest Wahoo Elemnt Bolt in Holland

Today, I started the day with a Yoga session together with Timea, who is an absolutely awesome Yogi. I have previously done Yoga (a.o. with Thomas and Adriene), but having someone who is sooo good at it correct you (if you are as inflexible as me), is really invaluable. I will make Yoga workouts and stretches a routine. Race biking puts you in some fairly unnatural and, frankly, uncomfortable positions (head forward).

Then, I realized I really need a bike computer. So far I have been using my mobile as a replacement bike computer. This worked pretty okay, as my mobile actually turns out to have pretty awesome battery usage (constant screen-on time with GPPS tracking and navigation of > 4 hours).

However, it has disadvantages, too: Yesterday, I spent one hour trying to pair my sensors (I have a breast strep to measure heart rate as a loaner from Georgios and a Giant Speed/Cadence sensor that comes as standard with the Giant Pro frames). Over the last year, I occassionally had the combination working. But it was extremely flaky. Sometimes the sensors would pair and sometimes they wouldn’t. Then, my mobile is pretty big. For example, that means I can’t actually fit the mobile and my aero bars together. In addition, I don’t really want my mobile to get wet when it rains (although, supposedly, it should do just fine). 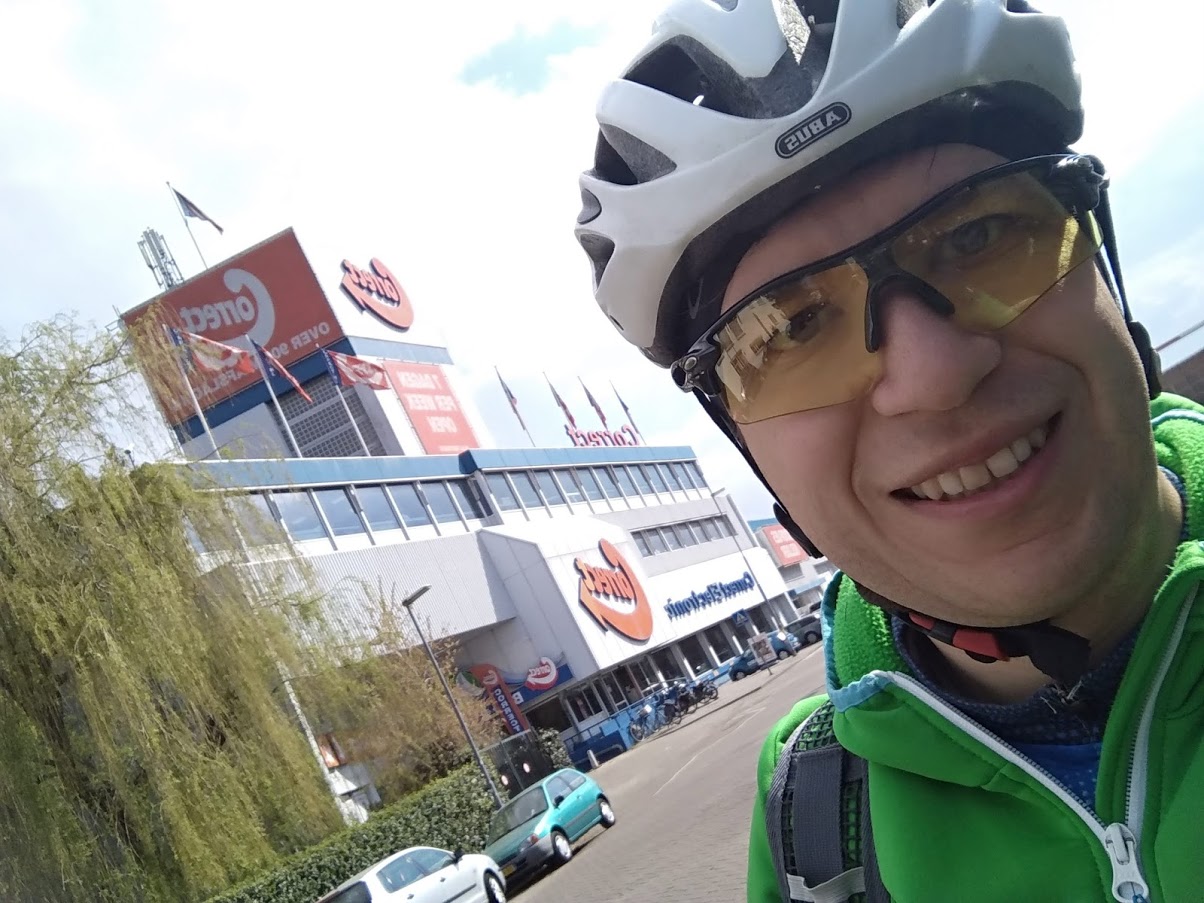 So I did a bit of research and pretty quickly knew that the computer I wanted was an Elemnt Bolt. There was a Chinese computer that seemed pretty interesting (and almost capable of everything the Bolt can do, including navigation), but coming in at 130€, I thought I’d rather spend the extra money on something that works for sure and where I have good support – Wahoo are apparently excellent in pushing updates. So I rode to Correct in Rotterdam to get the cheapest Elemnt Bolt in the Netherlands. Unfortunately, they knew that, too, so my pathetic haggling attempts were ill-fated.

I really liked the Correct shop, actually. People were friendly as I entered with my race bike (I was previously sent out of a McDonald’s and told to leave my bike outside, seriously!?). Down in the basement, they have a nice bike/sports shop with an almost complete Park Tool wall that reminded me of the GCN Tech Show wall. I especially liked that I was free to explore the offerings on my own without someone watching over my shoulder (that reminds me of my experience in a mall in India, where I basically had an entourage of 3 employees follow me, despite telling them that I justed wanted look around. I mean, I get they are well-intentioned, but I just can’t think and inspect stuff properly with some stranger awkwardly hanging 3 feet off my side).

Just last week, Correct were selling the Bolt for 200€ and this week, they already increased the price to 225€. Darn. Well, that’s still 25€ cheaper than anywhere else. 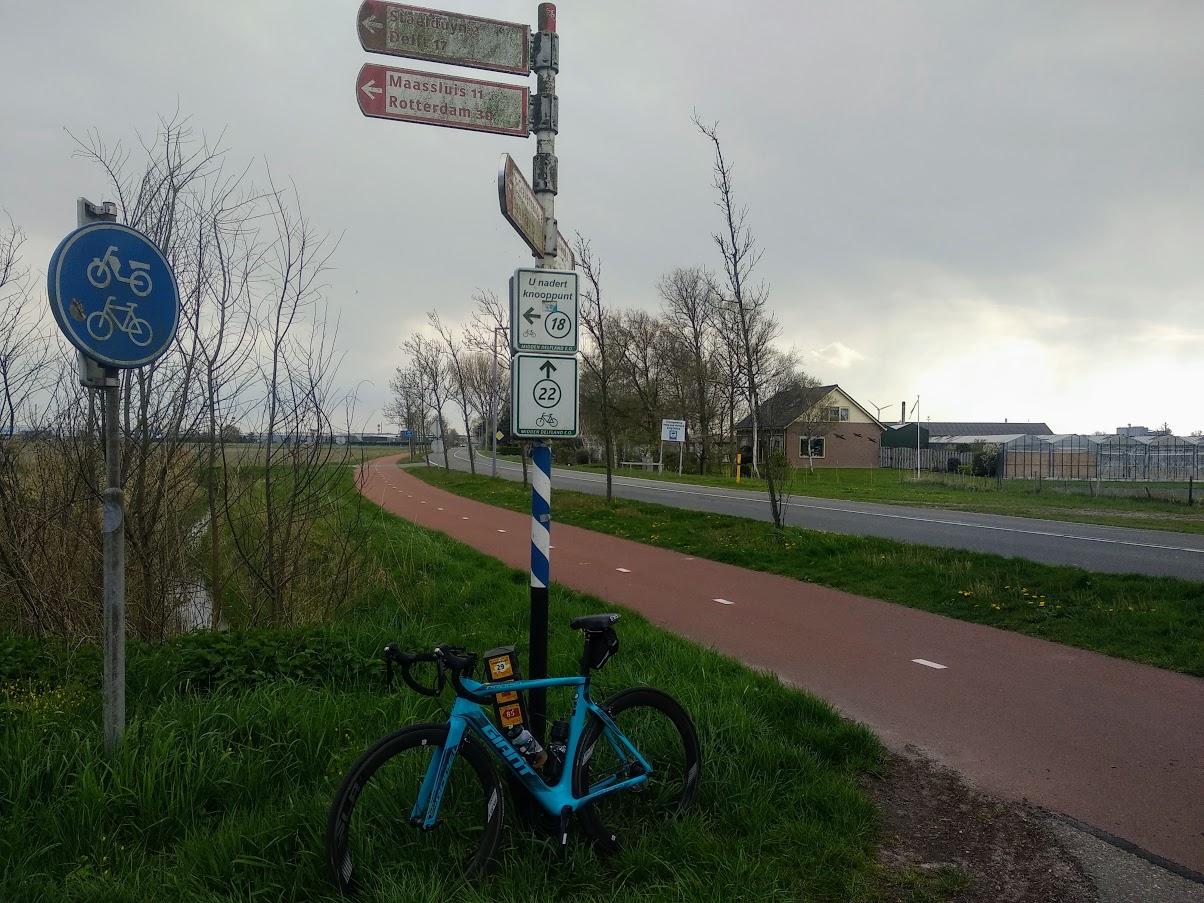 As you can see on my ride, I unfortunately overshot Correct by some 5 km. The moment I realized this was pretty bitter, and it would have implications for later, as it became a long and tough day.

Before that, Komoot took me on some really nice bike paths to the north of Delft, which I did not know, despite having lived and cycled in Delft for more than 5 years. Well done! Then, through an industrial zone in Rotterdam and by the Schiedam sauna. I had not looked at this part of the route too carefully in advance, so I did not know I was gonna pass by. It’s funny how when you have been to an area a couple of times you develop some sense of feeling for it.

Along the Maas, the wind started to bother me. As I turned north along the coast, I had an almost full-on headwind so I had to push even harder to get the bike forward at all – at least that’s apparently what it feels when your speed drops from 30km/h to 18km/h.

I was actually surprised to see I was still doing 18km/h. Good that I logged. While riding, it felt more like 12.

There is a reason why they call it the “Dutch mountain”. With my legs pretty empty and all energy bars gone, I resorted to the (one and) last banana. It restored my senses enough for me to turn away a bit from the bike path along the coast onto some more sheltered roads. It was still some way from home (my mobile’s battery ran out beforehand, so I chose to rather stop and save the track prematurely than potentially loose it all), where I arrived pretty exhausted but to the delicious smell of dinner prepared by Timea.