On one of my first cycling trips, I tracked my ride using three different GPS’es: one generated from my mobile, my Amazfit sports watch, and my newly bought Wahoo Elemnt Bolt. In this post, I finally get around to comparing them.

To do so, using Strava does not make sense: Strava takes your original tracks and maps them to known roads. Instead, for this article, I exported the raw GPS data, uploaded them to a GPS comparison site and imported them in Google Earth.

I followed DC Rainmaker’s advice (trivia #1: he actually was in my old home Delft on the weekend) to use Satelite and not Map view for comparison of GPS tracks.

Actually, back off a bit: I found this interesting study, in which researchers tried to find out this exact question – how accurate is Google Earth? It turns out that the offset in the city of Montreal (trivia 2: which ironically I came back home from yesterday) is anywhere from 0.1 to 2.7 meters.

I am not a GPS specialist and I do not know how accurate the calibration of Google Earth images is now in the Netherlands. We should use Google Earth’s images as a reference for the shape of the track, and only in case of stark deviations as an absolute reference.

I compared two bespoke devices, my GPS sports tracker, the Amazfit Stratos watch, and the Wahoo Elemnt Bolt, to my mobile phone, a cheapish Xiaomi A1. What’s amazing is that when using GPS on the phone, this rapidly drains the battery (9 hours of battery life or so). The tailored devices last much longer with GPS enabled. My Amazfit Watch has at least 18 hours of continuous GPS coverage, the Bolt 13 hours (I wonder whether something’s wrong with mine, as the official figure is much higher at 15 hours).

Which device would do better? The specific GPS-trackers, or the mobile which has the benefit of triangulation?

Overall, the track lengths are similar enough – note that on the Wahoo, I forgot to track the slow ferry and about 250 hundred meters after the start (as measured post-factum via Google Earth). So the total ride lengths are 56.92km (Wahoo Bike computer), 56.12km (Amazift Watch), and 57.83km (Xiaomi mobile). That sounds close enough, but when you start to look into the actual track, things start to become different:

To my surprise, the Elemnt Bolt and the energy-saving Amazfit Stratos were relatively similar. The mobile was significantly worse. 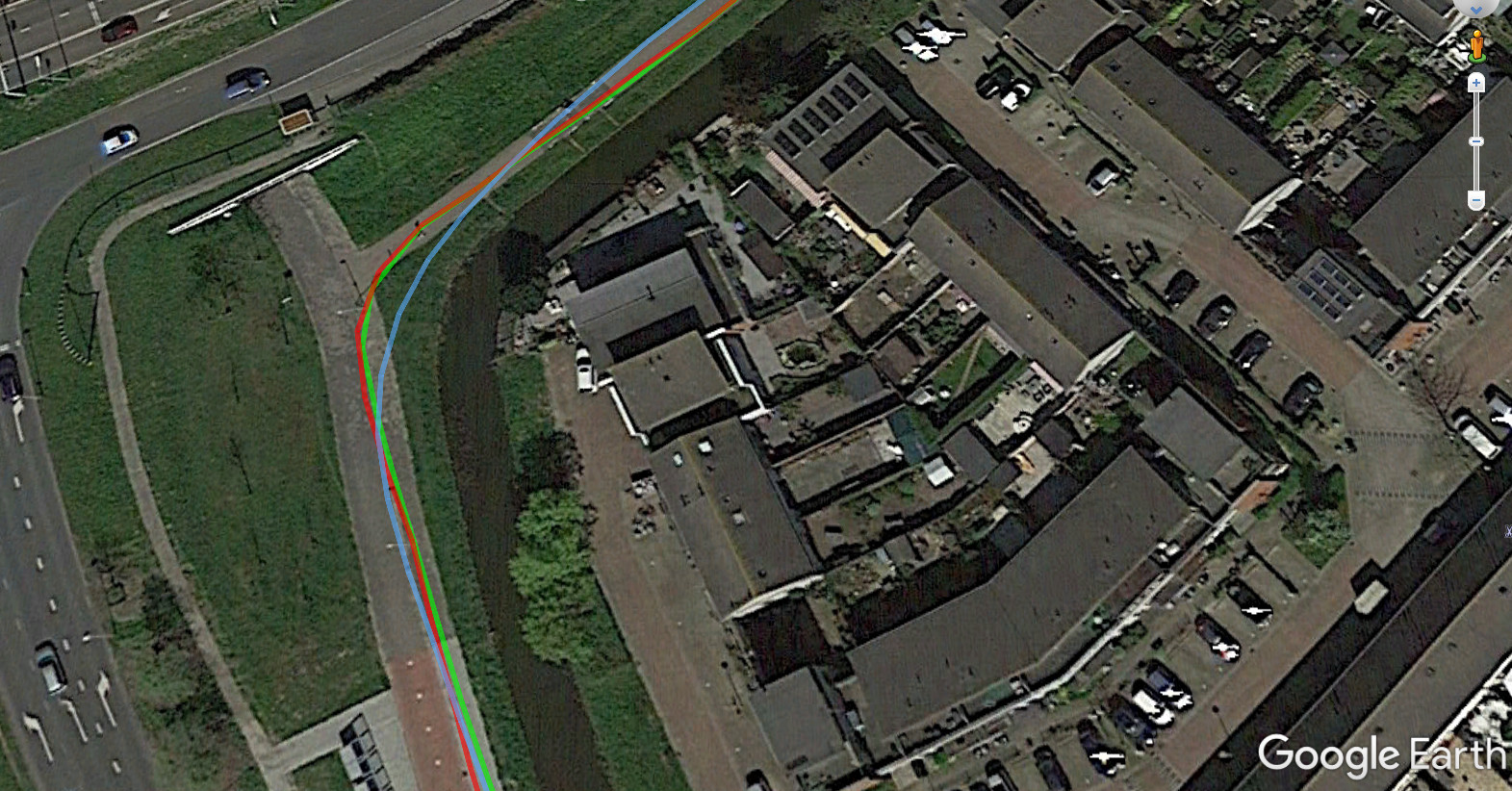 We can see all the devices doing a good job. The Amazfit Stratos seems to be cutting the route a bit short, which is in line with its shortest track. This might be caused by a lower sampling rate, i.e. saving fewer points per given time interval. The file size confirms this: The Stratos has about half the size of the Wahoo Bolt. This also makes the process less energy-intense. 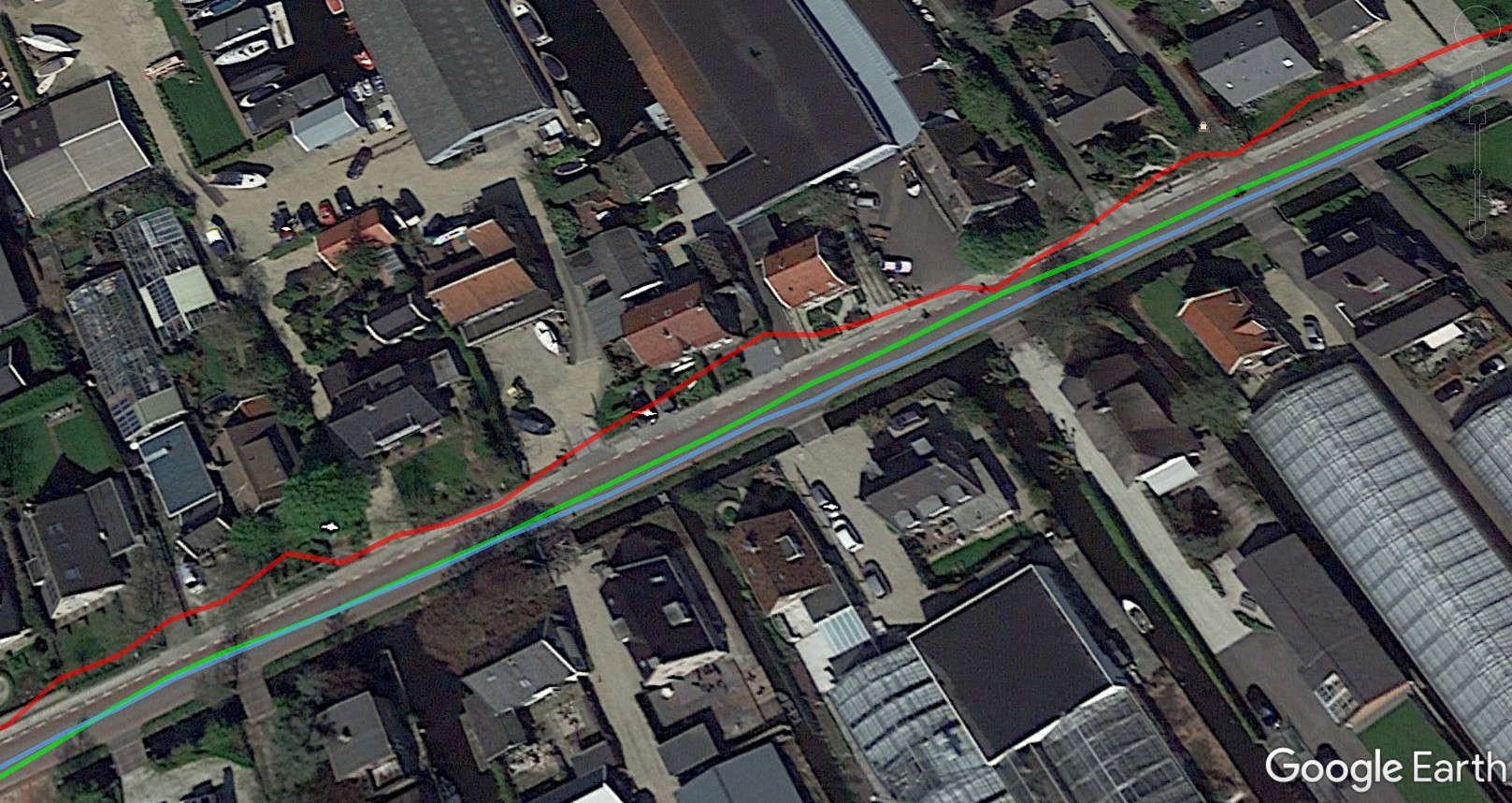 At certain points, the mobile seemed to be doing particularly erratic and bad, even though I was traveling in a straight line.

Looking at the speeds, the devices reported different average speeds of 23.9km/h, 24.8km/h (smoothened out by my speed/cadence sensor which uses the circumference of the wheel), and 24.5km/h respectively on Strava (!). It makes sense that the Bolt is fastest as I deactivated it for the slow ferry ride. 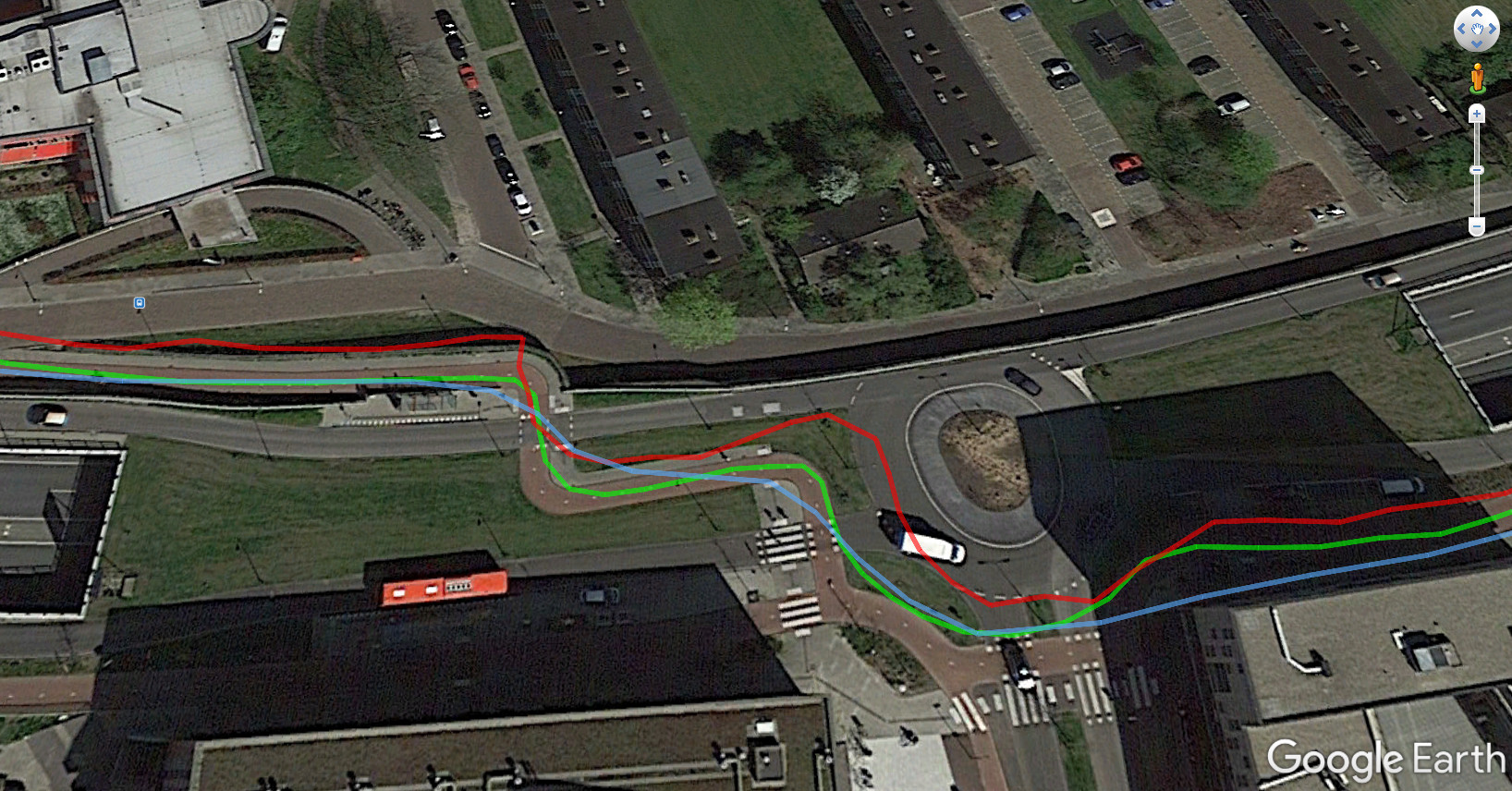 I thought I’d show this picture because it summarizes my findings quite nicely:

I was pretty surprised by the relatively bad performance of the phone. The phone was not bad for the entirety of the route though. I would be interested to hear how better phones do.