After we successfully completed the Amstel Gold Race yesterday, on the last MMday we took it a bit more relaxed. We went for a 90k spin that Martin designed on the breakfast table. The idea was to explore yet more of our surroundings, this time to the North (after going east and west on the previous MMdays), which included a visit to the only national park in Belgium, the NP Hoge Kempen, and to divide the route about equally on Dutch as well as Belgian ground (with lunch in Belgium, preferably).

Subsequently, we stopped quite a bit along the way and really inhaled the fresh air along the beautiful route. Which is ironic, because I assume it did not always use to be that peaceful and refreshing: we passed quite a few mines, relics from a time when coal was exploited from the ground in this region (similar to the not-so-distant Rurgebiet in Germany). We also enjoyed the sunny, if only a bit cold, weather (with a coffee stop, of course). 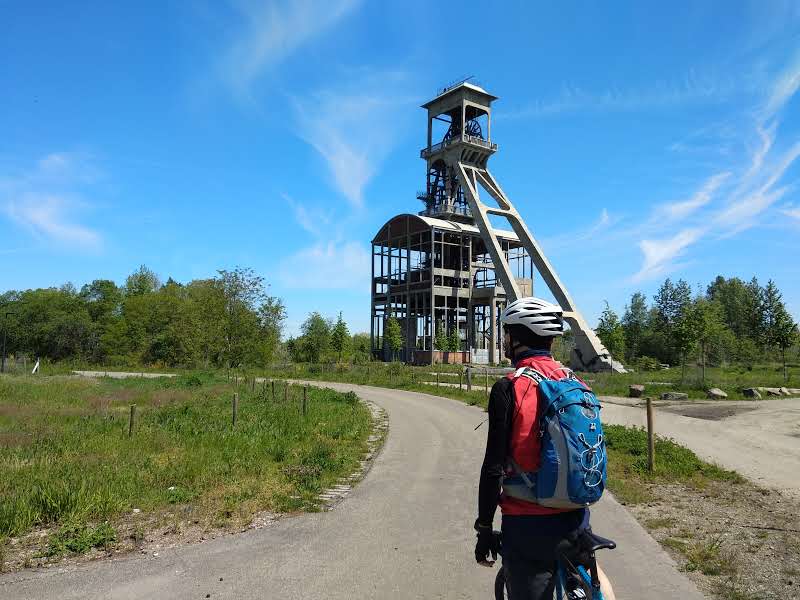 For lunch, we had (again!) burger with fries. Finding the place, which was rated with 4.5 on Google (and worth every star!) turned out to be a bigger navigational feat, as its small street was quite well hidden. Once arrived, Martin wanted the big fries portion, which the owner warned him would be “very big indeed”. Hah, I couldn’t even finish my small portion!

On the way back, on the Dutch side, we found some really nice asphalt cycle paths that just screamed “high speed”. This was on and along dikes close to the river Maas, that gives Maastricht its name. Martin and I went into a good rotation scheme and were soon overtaking other bikers (obviously, if you are doing 35km/h).

This is what it looks like when you pack two racebikes along with equipment into a 1-series BMW: It just about fi(e)ts! I am a bit sad the MMdays are over, but there is more to come!