Today was the big one: the Amstel Gold Race (well, the 125km tourist version of it, that is)! As I reflected on it, I was quite nervous beforehand: Would I make it up the steep ramps, despite my inadequate gearing? Since Martin has a really good base fitness anyway (and lower gears) and I saw that he knows how to pace, I was not concerned at all about him. But for me, I realized this one of the few things I have done, where I legitimately did not know whether I was going to be able to do them.

The week before the ride, Timea inspired me to do the Amstel Gold race (something on her bucket list, too). I downloaded the GPX file for the 125km route, imported it into Komoot and added our start- and endpoint in Lanaken. This resulted in a 140+km track, but I thought I would rather not tell Martin about the few extra kilometers since they were mostly flat anyway. Of course, this totally did not work, and Martin discovered my trickery very early on. Fortunately, he took it with a smile.

The Amstel Gold Race is one of the Cycling spring classics, this year spectacularly won by Dutch wunderkind Matthieu van der Poel. It consists of a route that zigzags around Maastricht (never really going further than 25km from Maastricht) and more or less picks up any hill in the region. On our route, we first did a transfer across the channel by boat from Belgium into the Netherlands.

Somehow, spending those 1,20€ for the ferry transfer always makes me really happy and feels like I am using my race bike. 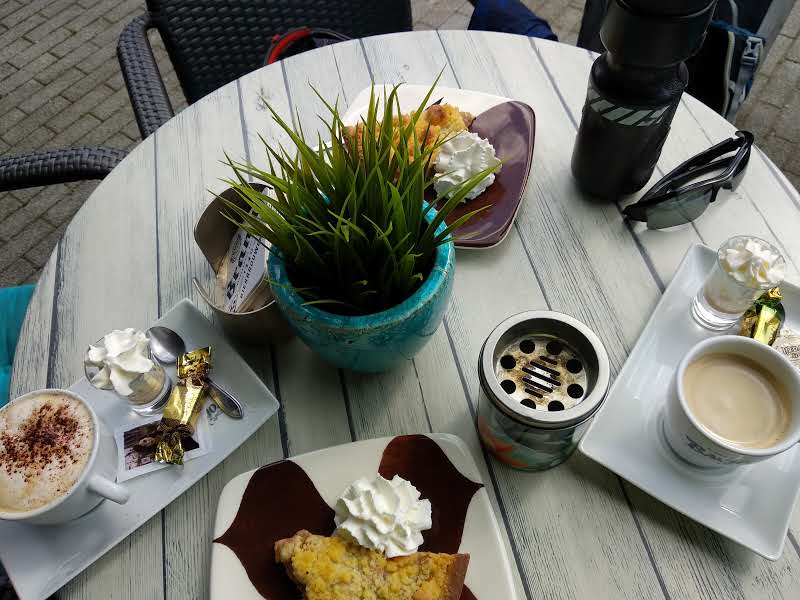 The first real hill on our route was the Maasberg. I really enjoyed riding up the relatively soft cobbles, but also began to fear: Would it get significantly steeper, I might not make it up? Would there be more brutal cobbles on the way? On we pressed, and Martin called for a cafe stop at exactly the right time (and right place): We had some uber-delicious rhubarb vlaai, a typical cake from the region of Limburg that has a caramelized base. Also, lots of whipped cream and a free Baileys shot … well, that’s special.

We then cycled alongside nice houses, a very sharp and distinctively shaped church tower and what looked like the same field over and over again. 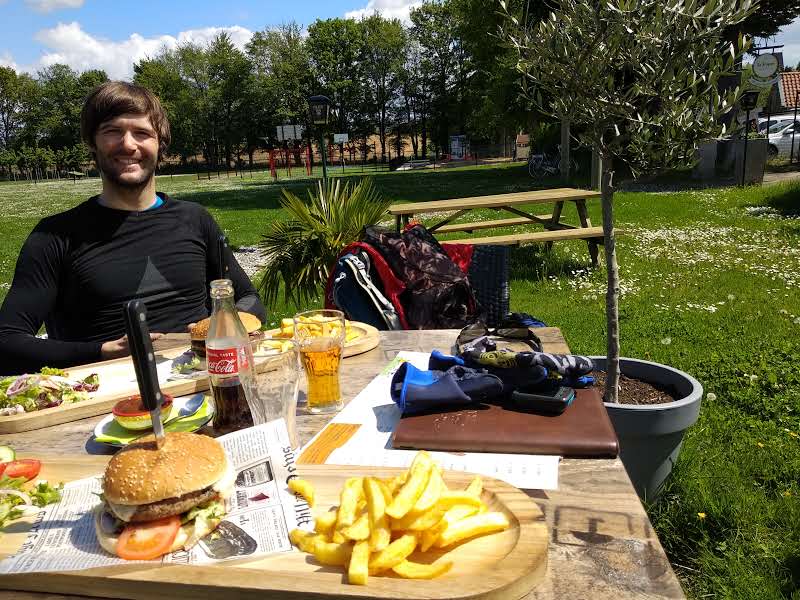 For lunch, we had a fantastic burger. But that also slowed us down significantly, as the entire process from order to paying took 1.5 hours: a typical Dutch eat-out experience (with the waitress also saying that it was “very busy”, well, there were maybe 4 other groups that ordered), except for that it tasted delicious! In hindsight, the enforced rest maybe wasn’t so bad.

After lunch, we cycled through some of those alleys where you ride on pretty narrow roads that are in a little dip with trees all around you. This was a very idyllic setting and gave me a nice, race-like feeling. The only thing that disturbed this perfect idyl was my ever-squeaking bike. At one point, I got the brilliant idea that it might come from my quick release skewer touching the frame. Lo and behold, I adjusted it for more space and silence followed (we formed some theories around whether it might be the bottom bracket, and I almost started to believe them). Fixing the noise gave me lots of energy and confidence back. So we took some of those steep descents pretty fast and soon had 95km behind us. 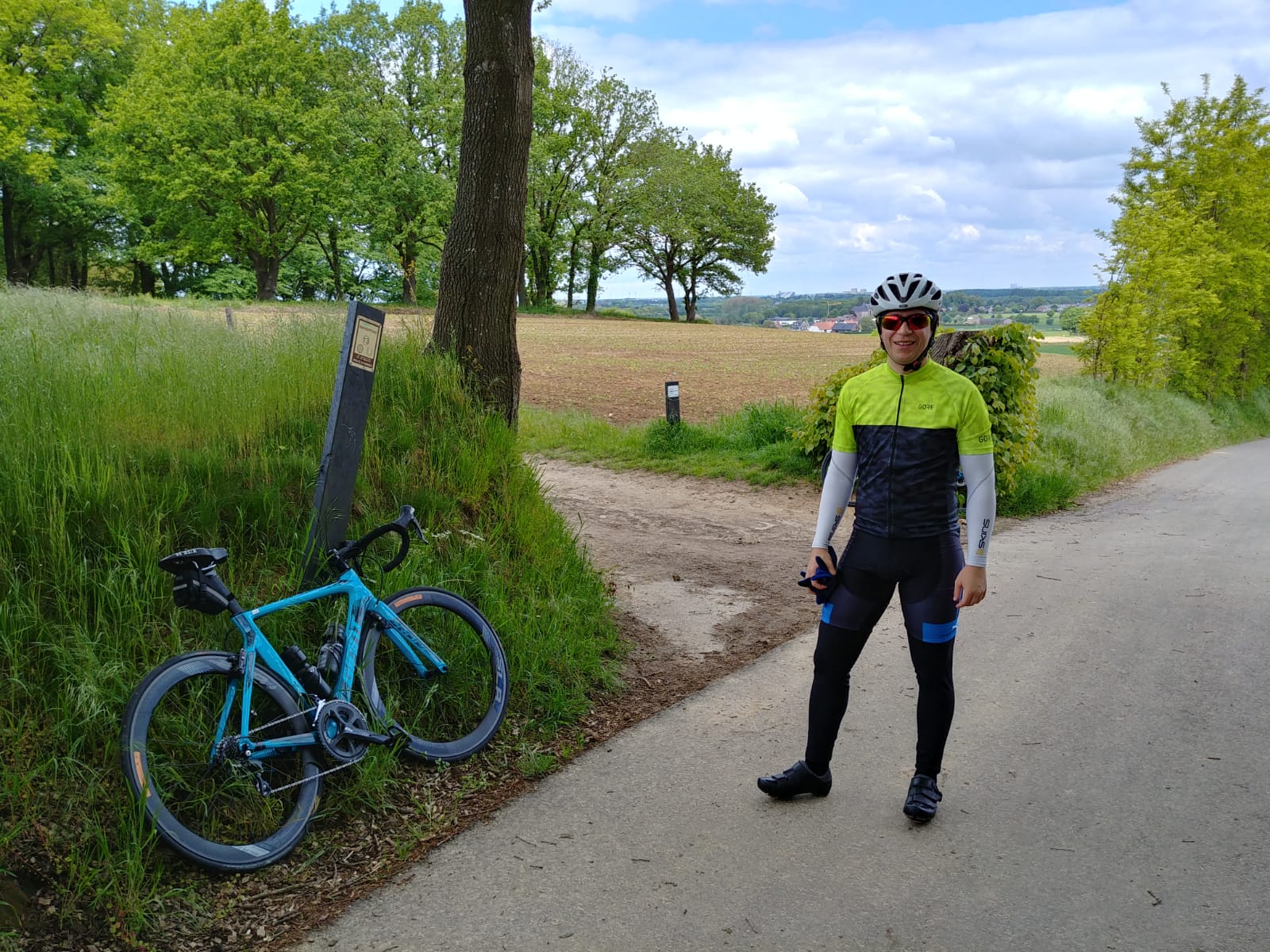 With four more serious climbs to go, we thought it was time for another quick fuel-up stop. Unfortunately, I ate half an Isostar bar that was only good until 2016 and got stomach cramps immediately afterward. They also wouldn’t disappear completely anymore during the ride, but I was able to continue relatively unbothered. 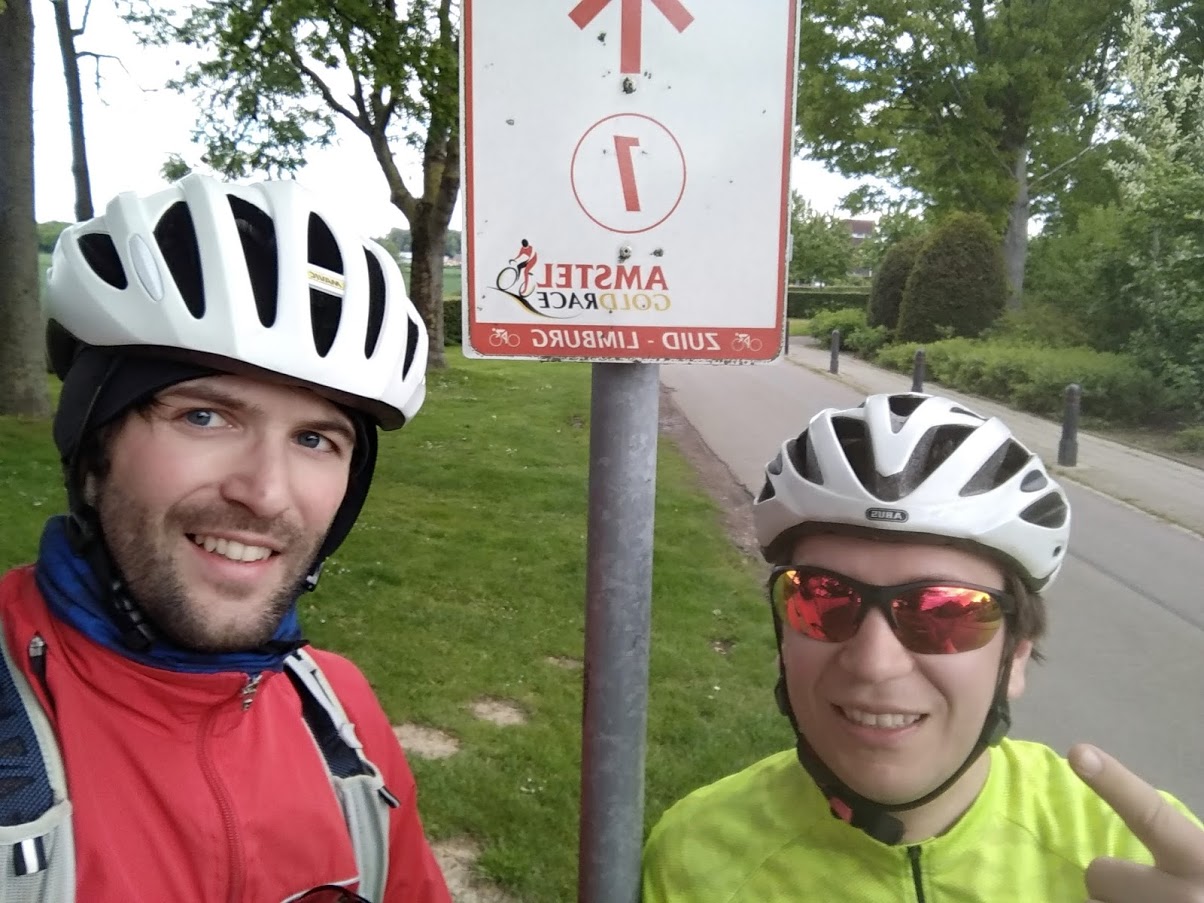 After another coffee stop with some lock trouble (someone stayed cool, the other person writing this not really), we could almost smell victory with 30km to go. I had configured my Komoot to show the altitude profile of the route. Knowing that the Cauberg was the last climb, I could contain my enthusiasm no longer and pushed 800 Watts for five seconds at the base of the climb. Unfortunately, I paced my climb not too well: After 1 minute, I was down to a mere 200 Watts. Even so, looking back at the Amstel Gold Race route, overall I was really fit (by my standards) and still going strong.

After completing the Amstel part of the route, Martin started putting the hammer down again and we swooshed to our home in Lanaken, on wide and smooth cycle paths around Maastricht. In hindsight, we could have easily done 150km, making this our longest ever ride. But, as Martin said, there also have to be goals for next year … 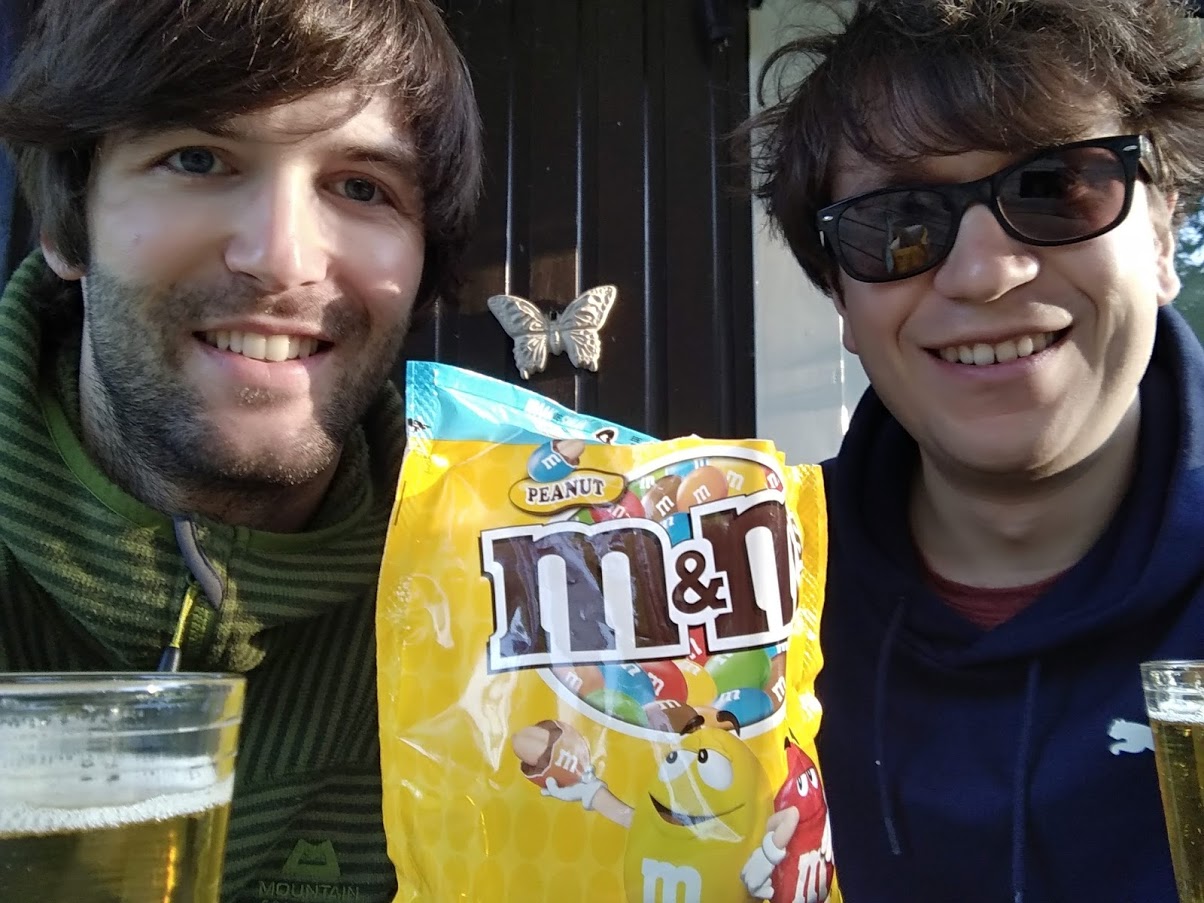 We ended MMday2 on a high and some M&Ms (how else would we?!). This was an intense and absolutely fantastic experience and I feel lucky to have shared it with Martin (who I can only hope has similar thoughts). Unfortunately, despite our best efforts, we could not find any Amstel beer … maybe not a surprise, we stayed in Belgium after all, so arguably better alternatives are available.