Today I joined my first ever group ride. I was pretty excited about it to begin with, and rightly so. What an experience! What I am now going to report are my very own personal recollections of this ride, and I am sure more experienced riders will smirk at them.

Lola is a coffee shop in Den Haag, where coffee enthusiasts and bikers meet (as it turns out, the intersection is pretty big). They regularly organize group rides such as Wednesday night’s rides out. Especially nice: You get a free shot of coffee before the ride.

After the espresso, I went outside and what awaited me was around 30 cyclists that seemed like a pack of huskies impatiently waiting to get dislodged. Then, the ride started, and it was on from the get-go. Unfortunately, one of the nice guys I talked to beforehand hit the curb with his wheel while turning onto a bike path, riding next to me. This made a very ugly sound, but his wheel seemed to be alright. I just thought “oh boy, had that happened with (my) Carbon wheels, that might have been it.” 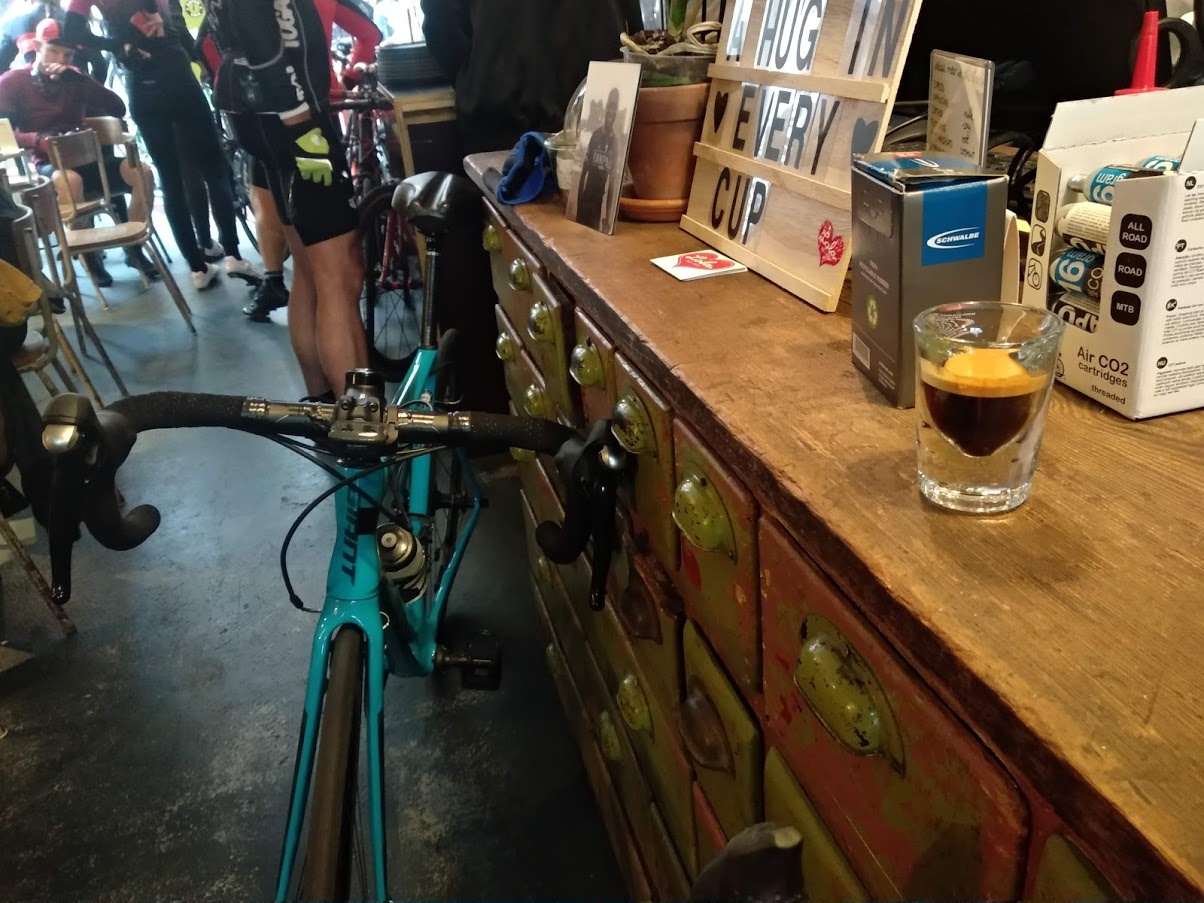 We regrouped at the onset of the bike path in Scheveningen and a fast group was dispatched first. I got a pretty good mid-field position in the big group that followed (I would estimate it to be at least 25 riders). In the beginning, I thought I did quite well, but I was always super-scared that I might not be able to break fast enough, so I left quite a gap to the rider in front of me. This is not how you should do it, and I knew that, too, but I just couldn’t convince myself to go closer. So I half-wheeled the rider next to me quite a lot. Sorry about that.

Riding in a group gives you these peaks in intensity – when it goes up a hill, out of a bend – where you need to put a lot of power down quickly, and then, for the most part, you more or less coast in the wind shade.

For the non-cyclists: Air resistance is the force that holds you back most of all from going faster, and is the reason why cyclists in a bunch can be so much faster than an individual. You share the work at the front, and (sort of) relax behind. So, overall, I was really happy that I was fit enough to ride in the bunch, even with my poor riding style. You can clearly see this in my heart rate: 159bpm average for a 1:20 hour exercise isn’t that intense. I doubt I would have been able to do the pulling in the front, though. What I really lacked was confidence and road bike handling skills. A day later, I have muscle ache in my hands, not the legs.

On the way back, I missed the re-start again (this time joining the fast group), so I had to pull some kind of monster sprint to just catch-up. That went fine, but then I was on the left side of the road, and I did not feel very comfortable riding there, so I went back to single file. At one point, about two-thirds in, the group was somehow separating, and I missed that moment (again, yucs!). The guys in front of me did not follow the others, and by the time I realized it, there was a twenty to thirty-meter gap. The leaders must have been drilling it.

I was feeling pretty fresh and confident, though. So I went around the guys in front of me and pulled a big sprint to catch-up.

I got to about two bike lengths to the last guy of the group (and erroneously thought I had made it) but never fully closed the gap. Stupid. And then I completely blew up. It was pretty interesting to see how you can go from feeling okay to done within a minute. The problem with playing catch-up is that when you do this, you are effectively working way harder than anyone else in the group, including the guys in the front doing the pacing. Because you have to match what they do, plus the extra effort required to close the gap. Just as proof to you that I really was working, my heart rate was 181bpm, the highest thus far recorded on a bike.

I should have put the remaining 1-2% of energy and pulled through completely.

What was good though is that I let myself fall back immediately, got swallowed by a two-person group and rode comfortably with them to the end, where we met again. A few other folks who were stranded in no man’s land between the fast and slow group kept fighting on their own, only to be absorbed by us later.

Some recollections on the ride:

Overall, I was blown away by the experience, and I will join again, but ultimately, I would prefer a smaller group with a more consistent riding style where the lead also changes on somewhat wider roads with a fixed set of people you know you can trust.