For my first training session of the day, I again started with intervals. ‘Cause I think for something to have a bit of an effect, you have to do it quite a few times. So I again did my trusty 5 times 3 minute max efforts.

What was quite funny to see was that there was a person (with a yellow vest) warning people of a section cut into the bike path (and yes, there was no road in the vicinity). Very nice touch. I wasn’t quite able to find the route from last time (roadworks + time pressure + no navigation set + me trying to find a brilliant shortcut) but found a street that was just long enough to go all-out for 3 minutes, then turn and go the other way. And so on. This time, my heart rate peaked at 175bpm, still 15 bpm short of its supposed maximum. But perhaps this kind of effort (as opposed to say, a gradual power build-up) does not lend itself toward maxing-out the heart rate. Either way, in the end, I was pretty surprised I even did 27k! Wow! I did hold back just a tad, knowing there would be another ride in the evening. Unfortunately, I arrived late for lunch, which caused some distress. 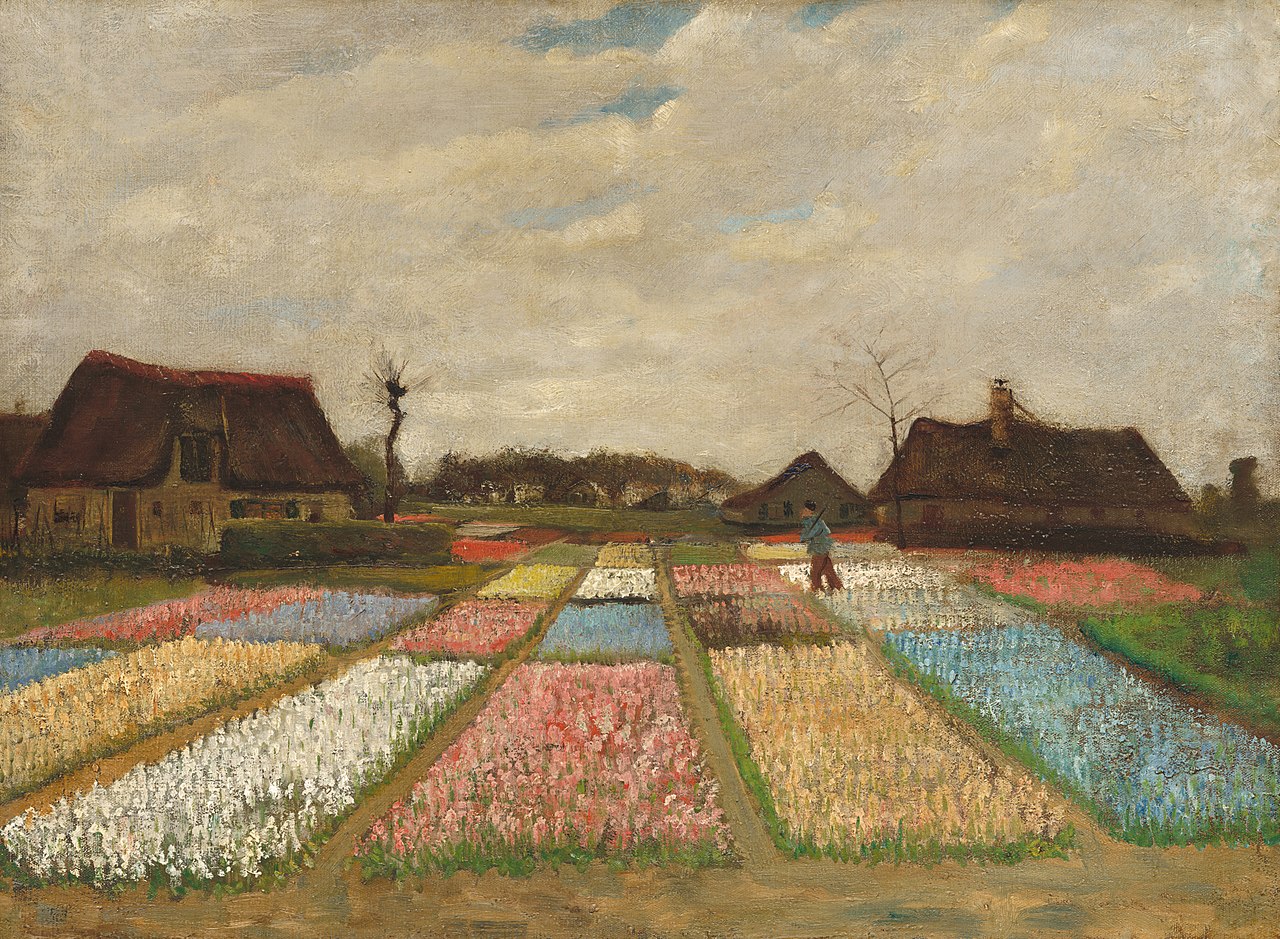 The second part was to inspect the tulip fields around Lisse again with Timea. Sad to report that by this time, most tulips are gone. This last ride of the day was also pretty darn cold. One way about other bikers here, and e-bikers in particular. Writing this a couple of days later, and I am still agitated. Today, while riding casually with Timea, we had three close-ish encounters.

On the bike path, no one hears or sees you scream.

First one with a group of e-riders who wanted to turn right while we were overtaking them. But we also wanted to go right. So we basically had the same situation as a merging traffic lane on the highway. Timea gets in between two riders in front of me, no problem, so zig-zag pattern dictates I leave a spot free for an e-biker and merge in the convenient gap between the next two. Except for that the biker behind me had not noticed me next to her at all and starts screaming “Ey Man” (I assume they were a group of German tourists. This is what German kids would say, for example, when you splash water at them).

The second one is an older gentleman approaching the biking lane of a roundabout with high speed. We were already in the roundabout, and the little arrows on his stretch of the road meant that he, merging into the roundabout, has to give way. Except for if you are on an e-bike apparently. Sure, the guy stayed on the right side of the track and wasn’t crossing, but despite the fact that I shouted, no reaction. I mean, he neither looked nor would he have been able to stop at all. Five minutes later, a group of e-bikers is getting back on the road as we pass them. Person third in line looks me straight in the eye as she starts (the first two didn’t even care to look), and just continues merging onto the bike path nevertheless, forcing Timea and me to an emergency stop. Seriously?! I mean, this was probably the “follow the group” instinct at play here, but would you do the same with a scooter?

I am definitely not doing everything right, but the apparently systematic negligence certain groups of road users show downright scares me. 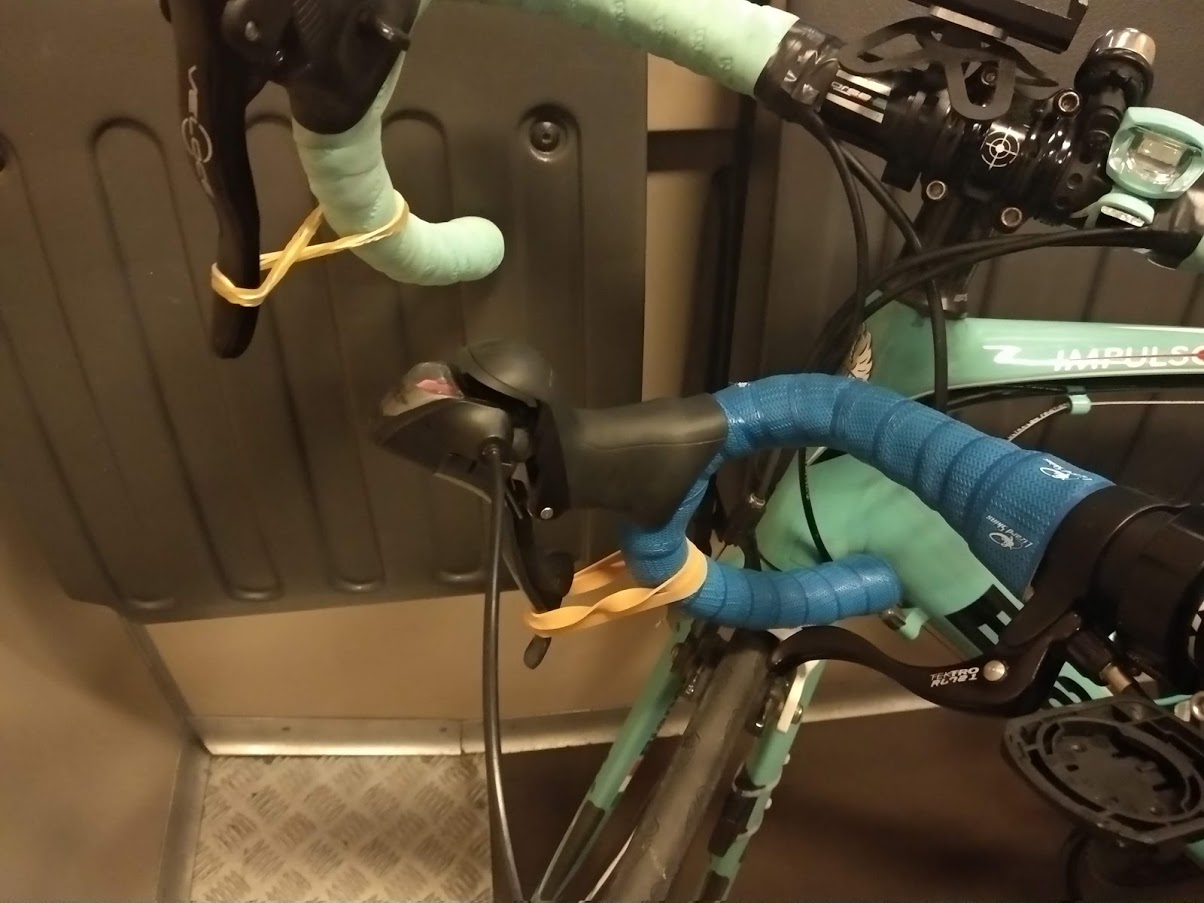 On the way home, I notcied in the train that my speed and cadence sensor started flashing aggressively, so I guess that means its (first) battery is running out. Shouldn’t be a big deal to change. When you do take your bikes in the train though, here is a free tip I received from a friendly fellow traveller and time trialist: Use an elastic (or something) to quickly jam your brakes. This decreases the chances of your bike moving about (or, even falling over) a great deal.